As our intrepid team prepare to set off on The Wild Edric, we are reminded of the need for serious winter training, but then our minds rapidly turn to the Christmas Festivities!!!

It may not be too late to get your names onto the list for the Vinghoe Velos Christmas dinner and for those already registered with our party organiser, jayne.raynor@ntlworld.com

The Vinghoe Velos Tea Ride will be a gentler ride than we do on Sundays, and will go at the pace of the slowest rider or wait at appropriate points. We will aim to cover between 10-15 miles (maybe a little more) according to the wishes of the riders who turn up. There should be someone to lead this ride most weeks, so maps shouldn’t be necessary. Occasionally there may not be a leader, and cyclists can use it as a meeting point to do their own ride. It is also our aim to stop for a cup of tea somewhere. The ride should be back at the pub by about 12noon (punctures permitting) for another beverage.  This ride should be suitable for anyone who hasn’t ridden a bicycle for a while, or is uncertain about trying to keep up on the Sunday rides. It is also a good extra ride if your Sunday is too busy for cycling.  All welcome.

Christmas dinner approaches and we need to make even more commitments ASAP!!

Transport manager Jim has arranged for a coach to leave Ivinghoe, pick up to at Dunstable and take us to dinner and then do the same return. The cost is £10 per person but commitment to this is required by the weekend by email to this site please.

For those still undecided whether to attend, get off that fence and contact jayne.raynor@ntlworld.com ASAP to see if we have more space!

Be safe out there

As the nights close in snows threaten and cycling becomes more of a minority sport our minds turn to the antics of GB cycling in the Netherlands and in particular the achievements of the GB ladies team including our very own VP.  Clearly the motivational talk from yours truly is what made the difference to enable the team to win gold! 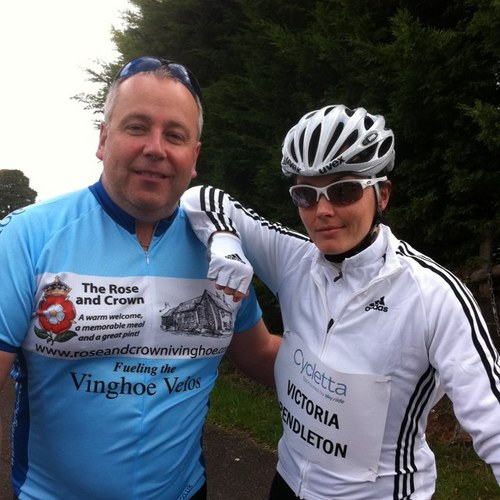 Having dealt with the serious news we turn to matters less relevant.

As our ranks grow, we have had further requests for the lovely blue jersey.  Enquiries have been  made to our fashion house for the purchase of a new winter version of this much sought after jersey.  For the princely sum of £45 we can secure these provided we manage to get 10 orders in place.  I believe we may be up to 5 already but would ask that anyone who is interested in them registers their interest by email before we pursue this further as a minimum order of 10 will be required.

Watch out for news of Sally’s Saturday morning rides, coming shortly to a village near you!

Tomorrow we have for you:

So ride ’em and weep.

for those looking for less

Following the success of the Velos at the Wiggle Rut, rumours are rife of several people looking to enter the Wiggle Wild Edric  on Saturday 29th October featuring 59 miles that take you gently to the top of the most rewarding hills with some breathtaking views over Shropshire and Wales with safe sweeping descents to enjoy  for further details speak to John Hegarty

As previously reported Jose and Andrew have now signed up for London to Paris next year, hoping to see Cav again cross the line first on the Champs Elysees.  If anyone is interested in joining us we have entered the Vinghoe Velos team name and propose doing fund raising as a team effort to assist all in achieving the minimum amount.  Alistair has kindly already agreed to us doing a number of fund raising events in the R&C so watch out for further news of these!

To finish off the Cuban adventure

Be safe out there!

Good afternoon from Vinghoe Central, and welcome to this weeks news and rides.

So news first, well Mark Cavendish may have won the world championship, but he couldn’t beat the Wiggle Rut. For those of you unfamiliar with this annual sportive here’s a little more information for you. Long before the continental plates went their seperate ways this challenging ride formed a mountain stage on the Tour de France, but today thanks to those shifting plates it’s now firmly located somewhere near Leicester. Those wanting more precise  details on the start point should not contact John Hegarty as he beleives the start point was just north of Milton Keynes.

This challenging route is 74 miles long if you fancy a morning run, and for those wanting to go to lunchtime, there is the option of a 100 miler. Ever considerate, the vinghoe velos elected to take the shorter route so a not to intimidate those hardened professionals doing the longer one. As noted earlier this route is well known for it’s mountainous terrain, according to Andy Beezer even the slightest climb was a category 5. (I don’t know what this means either, I thought it was computer cable) In fact the route was so challenging even our own King of the mountain, Jim, succommed after 35 miles and decided to take a nap whilst still on his bike. With his stabilisers missing he quickly departed the road, and continued his sleep into the hawthorn bushes. For those of you that are concerned I can confirm there was no lasting damage to the bush. This meant that Jim was unable to complete the ride, although one kind velo offered to take his timing chip over the finish line so that he “could get a really shit finishing time”. Our team spirit remains ever strong.

This meant that having lost two riders before the start, one to Delhi Belly and the other to Man flu, we were down to seven riders. Still the strongest team entry in the competition. New tictacs were therefore needed, but we didn’t have any so Scottish Dave, and little Dave set off in pursuit of the quickest time, eventually crossing the line in a very respectable 4.51. The remaining five, Andy and Hannah Beezer, John Hegarty (navigator), myself and another bloke called Dave finished in 5.01 thus ensuring that the team trophy was awarded to Vinghoe Velos. We await delivery of the trophy to our headquarters, the Rose and Crown, which we are assured is in the post.

Despite our significant entry in the rut there was still a good turn out for our regular Sunday morning ride. So thanks to all those who led this ride, in the absense of some of the usual suspects. For this week, business is very much back to normal, with guaranteed tropical weather. One route only, but two groups so that there’s a pace suitable for all. Just to clarify that means slow and not quite so slow.